Our Christmas Raffle takes place on Wednesday 21st December at 3.30pm at the Main Reception in St. Vincent’s University Hospital.

This year the raffle is for Palliative Care. Tickets are €2 a line or 3 lines for €5.

(There is a free raffle entry with every pack of Christmas Cards purchased).

See details below of the record number of fabulous prizes (which are on display at main reception in SVUH).

We are grateful to all the prize donors.

Raffle Tickets are available as follows:

13th Prize: Dinner for Two at Bianconi’s including a Bottle of Wine (donated by Bianconi’s Bistro, Merrion Road) 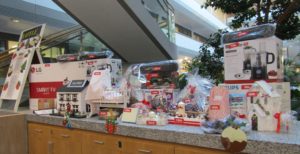