Tony was the first person in Ireland to undergo a liver transplant in St. Vincent’s 20 years ago. Coincidentally Tony was also the first Irish medal winner in this year’s World Transplant Games, winning four medals in total.

A number of liver transplant recipients who have joined the Irish team since Tony’s involvement have cited his achievements as part of their inspiration to get involved. The longevity of Tony’s transplant and his continued success at European and World Transplant Games is a point of pride for the staff of the Liver Unit here in St. Vincent’s. Ireland had 27 athletes competing in the World Transplant Games, of which four had liver transplants. Tony recently called in with his medals (see photos).

Some excerpts below from Tony’s report on his pioneering operation and his involvement capture the success perfectly:

“Twenty years ago, January 1993 to be exact, I underwent a liver transplant operation in St.Bridget’s Ward. This was the first such medical procedure to be carried out in Ireland and it is testimony to the expertise and care of all the staff there as it was a 100% success and I have enjoyed a fantastic quality of life through all the years subsequently.”

“Recently in July 2013, I travelled with the Irish team to Durban, South Africa. Over 50 countries participated and it was an incredibly uplifting experience to compete with and against so many fellow organ recipients from around the globe. Quite frankly I found the whole week in Durban intoxicating.”

“When we arrived back in Dublin we were given tremendous media exposure which all helps to bring the whole issue of organ donation to the forefront of public discourse.” 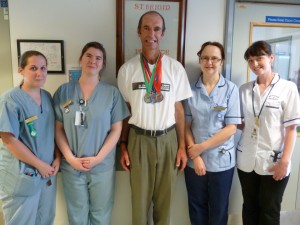